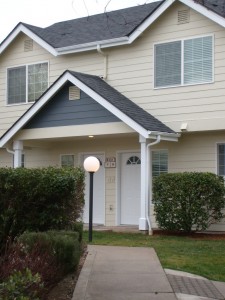 The Riverwood is an ambitious purchase of 171 units in Grants Pass, Oregon.

The property is a classic case where the sum of its parts is worth more than the whole.

Built in phases from 1991 to 2001, the 171 units broke down to 120 units of quality apartments, 30 units of townhomes suited to single family ownership thru condo conversion, and 16 units of 2001 era apartments that are also better suited to individual ownership.  An additional 4 units plus a single family home rounded off the project.

The property was acquired in June, 2007, and work commenced immediately on needed and overdue capital improvements to the 120 unit, including siding, landscaping, paint, and interior improvements.  This work was largely complete by May 2008.

Simultaneously, the condo conversion of the 16 and 30 unit properties commenced in the fall of 2007, and was complete by April, 2008, and included phase 1 of 2 phases of exterior work on the 30 units, plus interior improvements.

With 2 units closing upon condo conversion recordation, the market confirmed our believe in the desirability of these units.

By September 2008, however, with the credit crisis in full swing, the real estate market in turmoil, and residential lending disrupted, the retail sales activities of the Riverwood were temporarily suspended until better times.